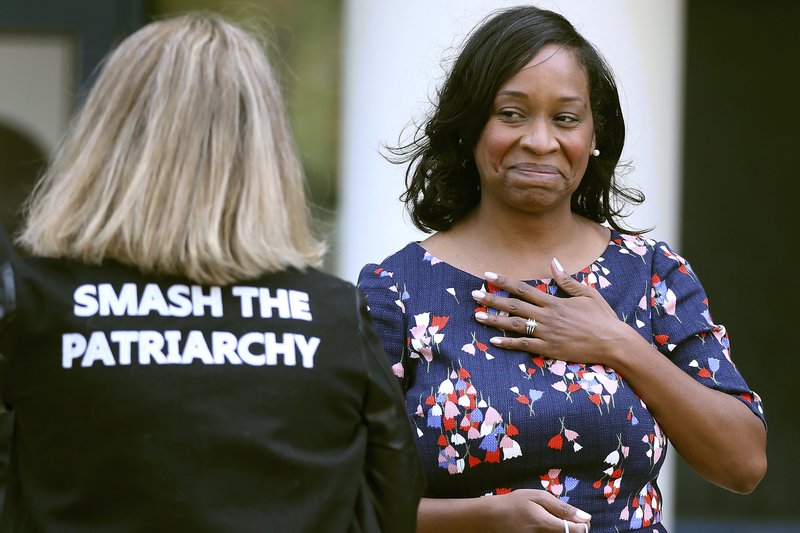 BOSTON (AP) — For the better part of a century, the iconic image of a Boston mayor typically conjured up the figure of James Michael Curley — the real-life Irish-American city boss elected four times as mayor between 1914 and 1946. Think Spencer Tracy in “The Last Hurrah.”

That stereotype may soon be going the way of Boston baked beans and tri-corner hats.

The city is on the cusp of having its first woman and person of color as mayor when current Mayor Marty Walsh becomes President Joe Biden’s labor secretary. Walsh is the latest in a string of largely Irish-American (and one Italian-American) mayors — all men — going back the better part of a century.

When Walsh leaves, the mayor’s office for the first time will go on an interim basis to a Black woman: Kim Janey, the 57-year-old president of the Boston City Council. An election this fall will be held to fill the job on a more permanent basis; Janey hasn’t said if she’ll run, but the three declared mayoral candidates are also women of color.

In some ways, the Boston of 2021 is unrecognizable from the city of just a few decades ago — with hardscrabble neighborhoods that once beckoned working-class immigrants now offering oases for the well-off.

The political shift mirrors what happened when the city’s surging tide of Irish immigrants wrested political control from the Boston “Brahmin” class in the early part of the last century.

The most recent evolution was foreshadowed in early 2020, when women and minorities first reached a majority on the 13-member city council. Two years earlier, the state elected its first Black woman to Congress, Rep. Ayanna Pressley, another veteran of the Boston City Council.

In retrospect, the transformation seems inevitable given that Boston is now a “majority minority” city with white (non-Hispanic) people comprising roughly 46% of the population, compared to 25% Black or African-American, 20% Hispanic or Latino and 10% Asian. As recently as 1970, white people accounted for about 80% of the city’s population.

For Campbell, born and raised in Boston, the inequalities that have divided the city for generations have been reflected in her own family.

Campbell attended the prestigious Boston Latin public school and went on to graduate from Princeton University and UCLA Law School. Her twin brother Andre struggled, dying in state custody at 29 after spending time in correctional facilities and hospitals.

“There are systems that served me well but failed him and continue to fail thousands of Bostonians today,” said Campbell, 38. “We need a candidate who not only understands these inequities but has lived them.”

The coronavirus pandemic, housing, schools and the ongoing opioid addiction crisis are just some of the challenges facing the city that require new leadership, according to Campbell.

“The city is changing because voters and residents are stepping up. The demographics continue to change. We are majority women and people of color,” she said. “Boston is not just ‘Good Will Hunting’ and ‘The Departed.’”

Wu, who is the first Asian American woman to serve on the council, said when she ran for city council in 2013, she hoped to double the number of women councilors from one to two — the other being Pressley.

“We’ve seen a rapid transformation of Boston politics,” said Wu, 36. “It’s not just that more candidates are raising their hands to run for office. It’s also that the political ecosystem has completely changed.”

Wu, who was born in Illinois and moved to Boston to attend Harvard University and Harvard Law School, said the pandemic has exposed the city’s divides. She said those rifts run though the Boston’s public schools, health care system and a stubborn wealth gap.

“We’re still in the midst of multiple interconnected crises,” she said. “Boston is at a turning point.”

George, 47, is the daughter of two immigrants who settled in the city. Her mother was born in Poland and her father was an Arab Muslim who emigrated from Tunisia. George, who identifies as Arab-American, was born in Boston, grew up in the city’s Dorchester area, taught at a high school in its East Boston neighborhood, and owns a yarn shop.

She, too, sees the mayoral election as pivotal.

“Time has presented us with this opportunity,” George said. “Representation matters and it’s important for residents of the city of Boston to see a reflection of themselves in leadership.”

George, who graduated from Boston University and earned a master’s from the University of Massachusetts-Boston said the city needs to nurture its economic base and neighborhood businesses if it wants to address issues like education and affordable housing.

Democratic state Rep. Jon Santiago, who is Latino, formally entered the race on Tuesday, and John Barros, the city’s chief of economic development, who is Black, is said to be mulling a run.

Black political activists have launched an initiative — dubbed WAKANDA II — aimed at coalescing around a single Black candidate for mayor, according to The Boston Globe. The name is in part a reference to a fictional African kingdom in the “Black Panther” movie.

It’s not the first time a minority candidate has attempted a high-profile campaign for mayor.

“It’s the same kind of basis for the political change that has been going on in Boston for the last several decades,” according to O’Toole, who said the real turning point was the 1905 election of John Francis “Honey Fitz” Fitzgerald as mayor.

Fitzgerald, the grandfather of President John F. Kennedy, wasn’t the first Boston mayor with Irish roots. But while earlier Irish politicians modeled themselves after the Brahmins, Fitzgerald was a former ward boss familiar with bare-knuckled politics.

The caricature of the streetwise Irish Boston mayor was born — one that would capture the public’s imagination in the larger-than-life figure of Curley, the inspiration for “The Last Hurrah.”

But that was then.

“The place is changing, and I think it would be great for the city. It would be great to have a woman of color as mayor,” said Robert Savage, interim director of the Irish Studies Program at Boston College. “Why not? It’s about time.”

Quotes from Stephen King interview with The Associated Press